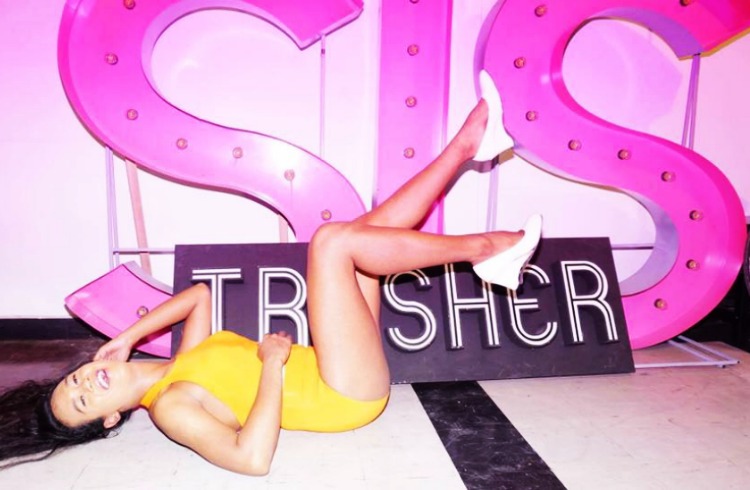 Ark Saroj was on the couch dancing in black underwear with a tiger on the crotch. “I don’t wanna rock, DJ, but you making me feel so nice,” he sang as he threw his arms out in a disco pantomime to Robbie Williams hit “Rock DJ.” The room was quiet and then burst into applause for the creative director and one of the founders of Trasher, the hit queer party and multimedia company in Bangkok. Another shot was taken and then the shoot went live, streaming across the internet.

Saroj wasn’t always dancing for thousands of Facebook live viewers. It all started with some mix tapes and parties for friends. “It began in 2007 in Café Democ and then went to Club Culture then to 808,” Ark said. “Now we move around to larger venues.”

The large venues are needed to accommodate the swarms of party goers that attend the monthly pop music affairs but, “at the time when Trasher began there was only rock, electronic, or ska music. People didn’t enjoy the club scene. They would just stand pretending to be so cool,” Jojo Tichakorn, the director and founder of Trasher said. “We started to play music that we wanted to hear. Pop music. It was bad, all pop music is garbage but it is recycled, it lasts forever and that’s why we named the party Trasher. We are garbage people that like trashy music.”

Since the humble beginnings at Café Democ in Bangkok the party has grown exponentially from 50-100 people at the first parties to thousands of people jamming the venues of GMM Live, Central World concert halls and the clubs of the RCA where the party is at. The growth of Trasher has been the savvy use of social media.

“We really grew a lot when we did the parody music videos, in 2007 or 2008.” Saroj said. The multi media company’s explosion began with their clever covers of popular hit songs such as “We Found Love,” by Rihianna , “The One that Got Away” by Katy Perry and “Call Me Maybe” by Carly Rae Jepsen, each of which have garnered over a million views.

Beginning with using hi-five, then myspace and finally facebook, Trasher has always had its hand in the internet world. “It really took off with our youtube not a lot of people were doing homemade videos. We only promote via social media,” Tichakorn stated. “If we aren’t always growing if we will not evolve and the party will die.”

The founder and director’s knowledge of the changing landscape of media has had him expand from running the theme parties to starting a youtube web series, Gayok, sponsored by Testbkk. The show aims at accurately portraying the lives of Gay men in Bangkok. With 60-70% of the Trasher attendees being LGBT and with both Ark Saroj and Jojo Tichakorn being out gay men Gayok is a natural extension of the Trasher project.

“I want Trasher to become a community that loves the same stuff, from music to movies, to art, to culture. In the media, especially Thai media, gay people are portrayed as comedic. I wanted to create something that gives people hope. That we are the same as straight people, that we can have a happy life,” Tichakorn said.

Trasher has had a huge impact on the party culture and has made the nightlife culture more fun. Rather than standing around tables Parties like Trasher have helped create a positive atmosphere to meet, talk, and engage with other party goers that attendees might not know. With Trasher expanding outwards into Gayok and other media projects the fun isn’t just on the dance floor anymore.

For the next Trasher party check out their Facebook community here

Muay Thai boxer, TV commentator and author of The Boxer’s Soliloquy. Tweet him at mattlucas1968