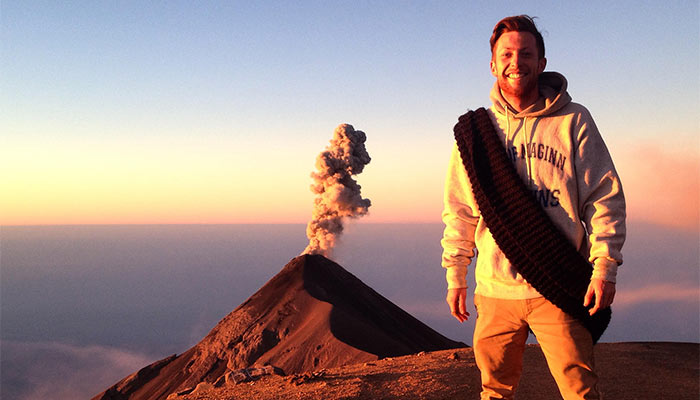 Coming Out on the Road: A Traveler’s Fear of being Different.

“The sex is great, but she’s crazy. What would you do?”

“The sex is great, but she’s crazy. What would you do? ” asks Simon, the German backpacker I just met this morning on a train bound for Kanchanaburi, Thailand. He’s spent all day telling me about his girlfriend back home: her trust-issues, her exes, and her boobs. As I assume guys do, he wants me to be impressed, jealous maybe, of his sexy, wild girl. I’m not. And tonight, him and I are sharing a tiny, intimate bungalow – I know, moving quickly.

Afraid to freak him out or ruin my first traveling friendship, I still haven’t told him I’m gay. And to his lament, I reply with an innocent, but honest, “I don’t know. I’ve only had one relationship.”

As a male traveler, it’s expected to get along and travel with other males, like a bro thing: drink beer, talk about rock/rap music, and scope girls out together. And while I try (and fail terribly at the latter to the point where I succeed at the first), it’s always awkward. Maybe they don’t feel it, but I certainly do.

I’m always afraid to reveal I’m gay, even after being out for 11 years, after coming out to hundreds, maybe thousands, of strangers and friends. So why is it so hard to come out just one more time?

Perhaps rejection is scarier on the road? After all, I don’t have the comforting shoulders of familiar friends, the support system of family, or my complete collection of Kelly Clarkson to get me through it. Nor is there a cheap Cabernet in Southeast Asia to down by the bottle.

But the truth about backpackers is this: They are probably the most open-minded people in the world. Travelers leave their countries, their culture behind, to learn about others’ beliefs and lifestyles. They are traveling to learn of our global differences, and better, our similarities. And of course, to have a good time. We all just want to find genuine, exciting connections, to laugh, smile, and love one another.

“Have you ever had these girl problems, though?” responds Simon.

I hold my breath for what might come next.

The next three seconds feel like the 3-hour train ride this morning.

“Have you ever had these GUY problems, then?” He laughs as he makes it clear: he doesn’t really care, he just wants advice.

And suddenly, it feels as if I have just taken off my 20-kilo backpack after a long day of travel. Maybe our differences are trivial compared to our similarities. Maybe coming out needn’t be so scary; after all, everyone is different on the road of travel.

I’m a 24-year-old thrill-seeking, city-hopping, always smiling guy on a crazy journey to somewhere. My goal is to inspire you to travel, and show you how to do it on a budget.
Follow Him – Facebook | Instagram | Blog