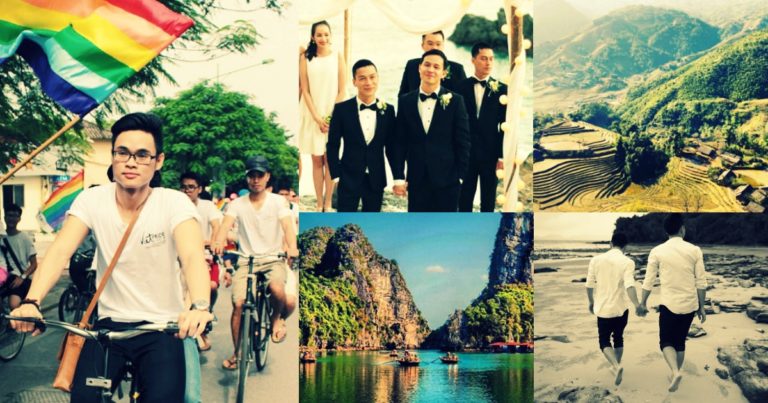 With a growing population of 90 million people and an average of 1.65 million people who are LGBT, Vietnam has achieved so much in terms of initiatives and movements that are changing the country’s attitude towards the LGBT community.

Below are 8 iconic LGBT events that happened in the course of 5 years:

After the local government’s announcement of considering legalizing same-sex marriage, the Vietnamese LGBT community wasted no time and eventually organized the very first Viet Pride in August 2012 within a span of 1.5 months of organizing.

Together with the help of the US Embassy, Viet Pride, and CAMA ATK Hanoi, the first ASEAN Pride was one of the nation’s largest live music events of the year and the largest government-sanctioned LGBT event in 2014.

U.S. Ambassador Ted Osius, left, and his husband Clayton Bond with their child. Photographer: Le Duc Tho via David Evans

Making the grand entrance in late 2014, US Ambassador to Vietnam Mr. Ted Osius and his husband, Mr. Clayton Bond’s arrival was a clear sign that the country was on its way to becoming a more open and accepting nation to the LGBT community.

On the very first day of 2015, the Vietnamese government abolished the ban on same-sex marriage and has led the gay rights movement. The change in law does not go fully recognizing same-sex unions and dose not grant LGBT couples with equal marriage rights but its a huge step forward in the movement. In truth the new law turns a blind eye to same-sex unions. More info

Right after the ban lift of same-sex marriage on New Years Day of 2015 by the Vietnamese National Assembly, famous fashion designer Adrian Anh Tuan and entrepreneur Son Doan didn’t wait too long to hit it off and finally tie the knot in Nha Trang on the 24th of January.

In partnership with the US Embassy, VietPride and the sponsorship of IBM, Swedish company MB Market Makers have put together a business leader forum in the capital city discussing the latest research, insights and best practices for the LGBT market in Vietnam.

Allister Esguerra is the co-founder of Xplore Vietnam, a publication dedicated to showcase Vietnam’s LGBT community to the rest of the world.
Follow Allister – Facebook | Instagram | About Me
Explore Vietnam – Gay Guide to Hanoi | Gay Guide to Ho Chi Minh