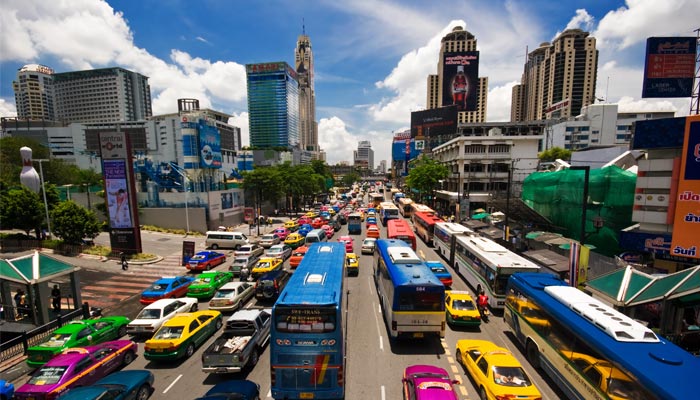 Sukhumvit Road Bangkok and its many adjoining ‘sois’ (side-streets) are poor on traditional tourist attractions but rich in Bangkok style shopping, eating and nightlife. The many fashionable restaurants, bars, air-conditioned malls, luxury hotels and hip clubs give the area a distinctly modern, cosmopolitan flavour.

Unlike Silom there is not much Gay life happening along Sukhumvit Road. Although it’s dotted with many of the luxury hotels (Sofitel, Sheraton Grande, Westin), fashionable shopping malls (Terminal 21 and Emporium), and the trendy bars of Thonglor there are no gay bar or clubs located in this part of town. However this does not mean it is not worth a visit.

Two of the three straight red light areas are located on Sukumvit with the city’s most sinful spots, Nana Plaza (Soi 4) and Soi Cowboy (off Soi 23) found here. A few, stress-busting pockets of calm can be found in the sweet cafes, atmospheric restaurants and lush day spas that are hidden down many of its sois. Making exploring its staggering length incredibly easy with the Skytrain (BTS) that travels above the road.

Sukhumvit Soi 11 offers a great collection of bars and clubs. From street side converted VW van bars to swanky rooftops bars Soi 11 is a great party street but not a gay bar in sight.

Sukhumvit offers the best dining in Bangkok, from five-star dining to street stands, the variety of choices and tastes are almost overwhelming. Sukhumvit’s pavements have grown into a huge market carrying everything from fake brand name luggage to Rolex watches. After after midnight these street side markets turn into bars and pubs.

Sukhumvit Road is both Bangkok’s and Thailand’s longest road with most of the action happening in the first 60 Sois after which it become mainly residential. While Bangkok is often as a less cosmopolitanism city many international residences are found along Sukhumvit. Many Japanese nationals can be found in the area Soi 21 and upwards, but most tend to congregate around Soi 55. Indians have settled around Soi 12, while Arabs are grouped at Soi 3/1, which informally is known as Soi Arab.

And the Best club on Sukhumvit Soi 11 is Levels

And for a look into the dirtier side of Sukhumvit a video of Soi Cowboy located just off Soi 23.

BTS Sky Train: In Bangkok the BTS has two lines the Silom line and the Sukhumvit line with Siam acting as central station. The BTS is an excellent way to travel and see around Sukhumvit road. On the Google map below Sukhumvit BTS is the light green line.

MRT Underground: The MRT crosses Sukhumvit road at Sukhumvit Station where it meet with the BTS station Asoke.  The metro ride from Silom takes about ten minutes. Trains leave every five to ten minutes for a fare of about 15 to 40 baht. Please note MRT Tickets cannot be used on the BTS or vice versa.